Cooperativa Produttori Latte e fontina was founded in 1957 with the aim of collecting, ageing and marketing the par excellence agricultural product of the Aosta Valley: fontina PDO. There were 46 founding members initially, which have today risen to 200 including private companies, cooperative cheese factories, dairies and pastures. The cheeses delivered by the members in 1958, the first year of operation, were less than 40,000, while today this number has increased to approximately 300,000.

The Cooperativa Produttori di Latte e Fontina was founded in 1957 in Aosta Valley in order to produce, sell and promote the Fontina Valle d'Aosta DOP.

The Fontina, the most famous cheese of Aosta Valley, is still produced the same way it was seven centuries ago, with slow rhythms and weighted processes, although, because of the increasing demand from the customers, the production is now equipped with modern machinery.
It continues to be a loved and appreciated cheese all over the world for its specific characteristics that are nothing more than the reflection of the territory in which it is produced.

The Aosta Valley is a protected environment that has developed fundamental characteristics for the production of food such as cheeses and sausages.
The Aosta Valley’s population, in the past centuries, had to cope with living conditions rather unfavorable, considering the territory and the climate of the region; nevertheless it made the most of the limited resources available and learned to breed cattle whose characteristics were compatible with the environment in order to get meat and milk to prepare the Fontina.

A simple production process proven over the centuries, which earned the Protected Designation of Origin (PDO), a mark attesting the quality and origin of products and a further protection for the consumers around the world.
Today the offer of the Cooperativa Produttori di Latte e Fontina is not limited to Fontina cheese - available in different sizes, from 200gr to the entire form - but it comprehend small children cheese, slices for toast, slices of Fontina cheese and fondue.

All the products of the Cooperativa Produttori di Latte e Fontina will be shipped with an official cookbook. 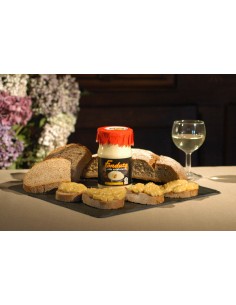